Stay connected and get all the latest updates 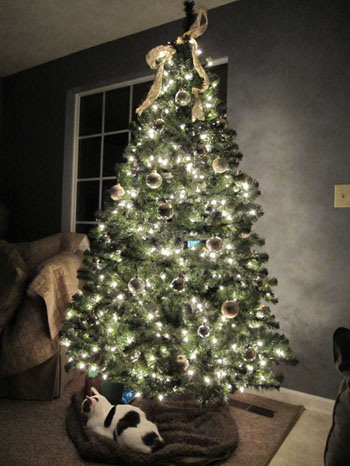 I’ve been fairly stressed over the past several days because I was waiting on the lab results for my 14 year old little buddy, Dubie. We took Dubie to the vet to determine why he lost so much weight and what was causing his allergies.

Matt’s dad was very kind and helpful and drove us to the vet on Saturday. Dubie was very upset about the drive and cried the entire way there and back. Dubie tolerated the vet visit the best he could. We visited a new vet and I feel very comfortable with her. I appreciate that she wants to take his treatment in steps instead of jumping into costly procedures.

So I patiently waited for the lab results and just received a call from the vet this afternoon (Thursday.) Honestly, I was expecting to be told that he was terminally ill and that I’d only have a short time left with him.

When I spoke to the vet, I found out that his kidneys, liver, and sugar levels are normal. His blood work showed that he’s definitely having problems with allergies- most likely due to his food- and he also has an overactive thyroid. She suspects that he’s also having allergies due to our new cat, as many of the symptoms showed up at the same time we adopted her. I had changed the food around the same time, too.

Dubie’s allergy medication is making him very sleepy and somewhat moody. I was delighted when I got him to play a little bit yesterday. For the most part, he sleeps under the Christmas tree or in his cardboard box that he confiscated while we wrapped Christmas gifts for Matt’s sister.

He’s an indoor cat, but we take him outside to sit on the deck. Even though it’s December, it’s been between 40-60 degrees here so I’ve been able to take him outside. He loves it and despite the medicine, he perks right up when he’s outside.

Join hundreds of others and receive weekly inspiration directly to your inbox.

Laura and Matt are from Charlottesville, VA.
Read, shop, get inspired.
We hope that you enjoy our featured gift guides and collection of favorite ways to organize your life and home.